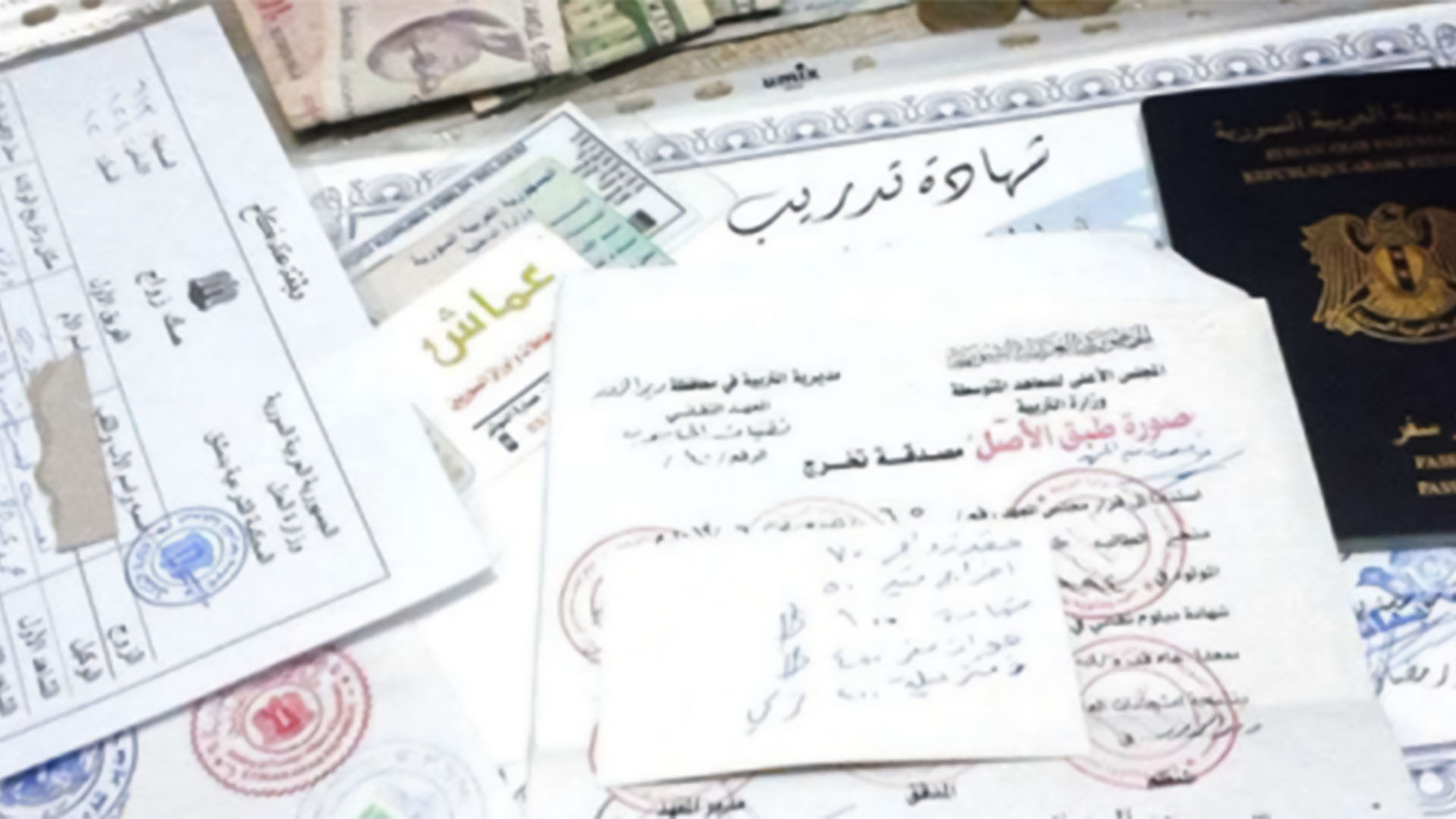 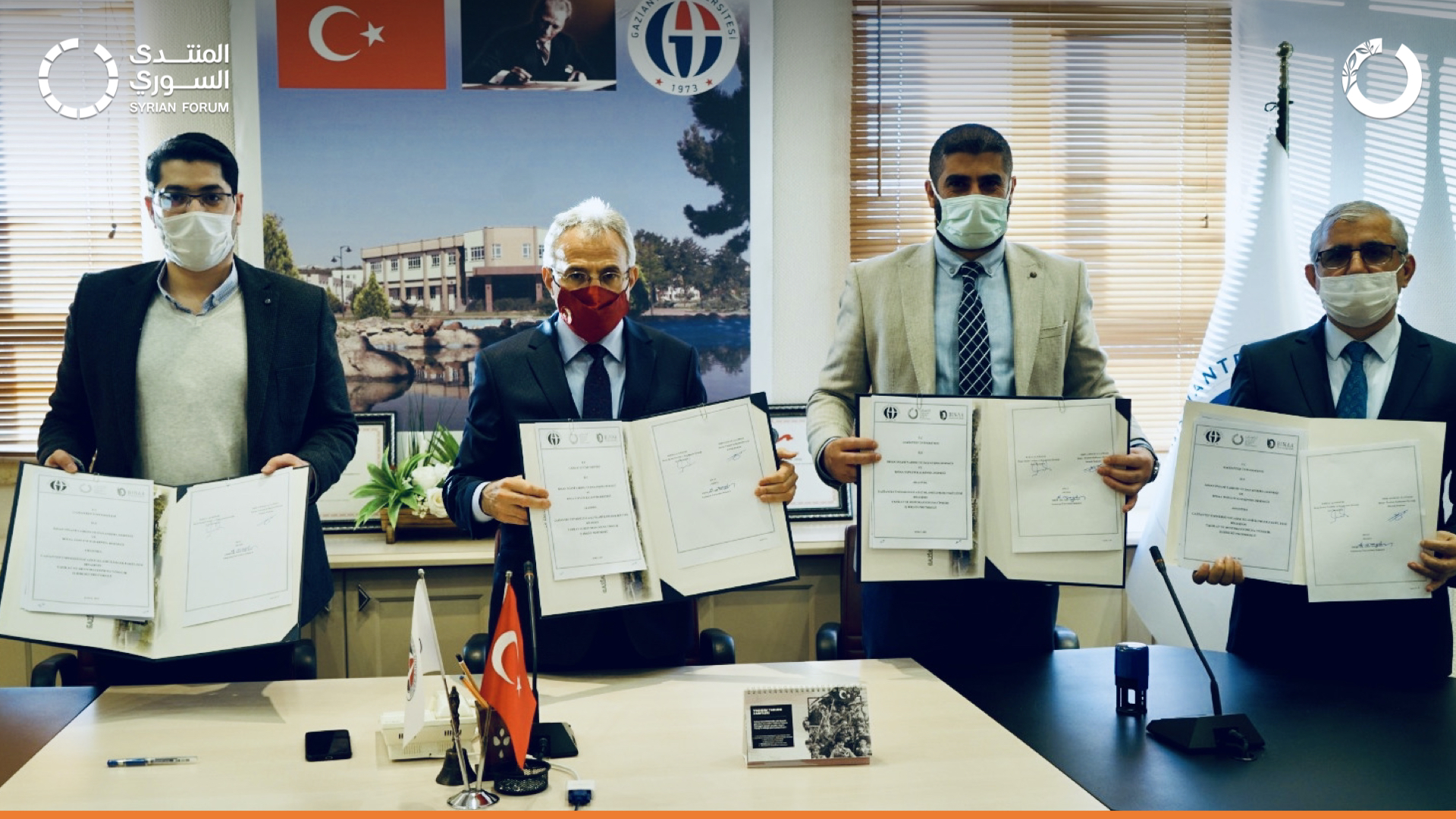 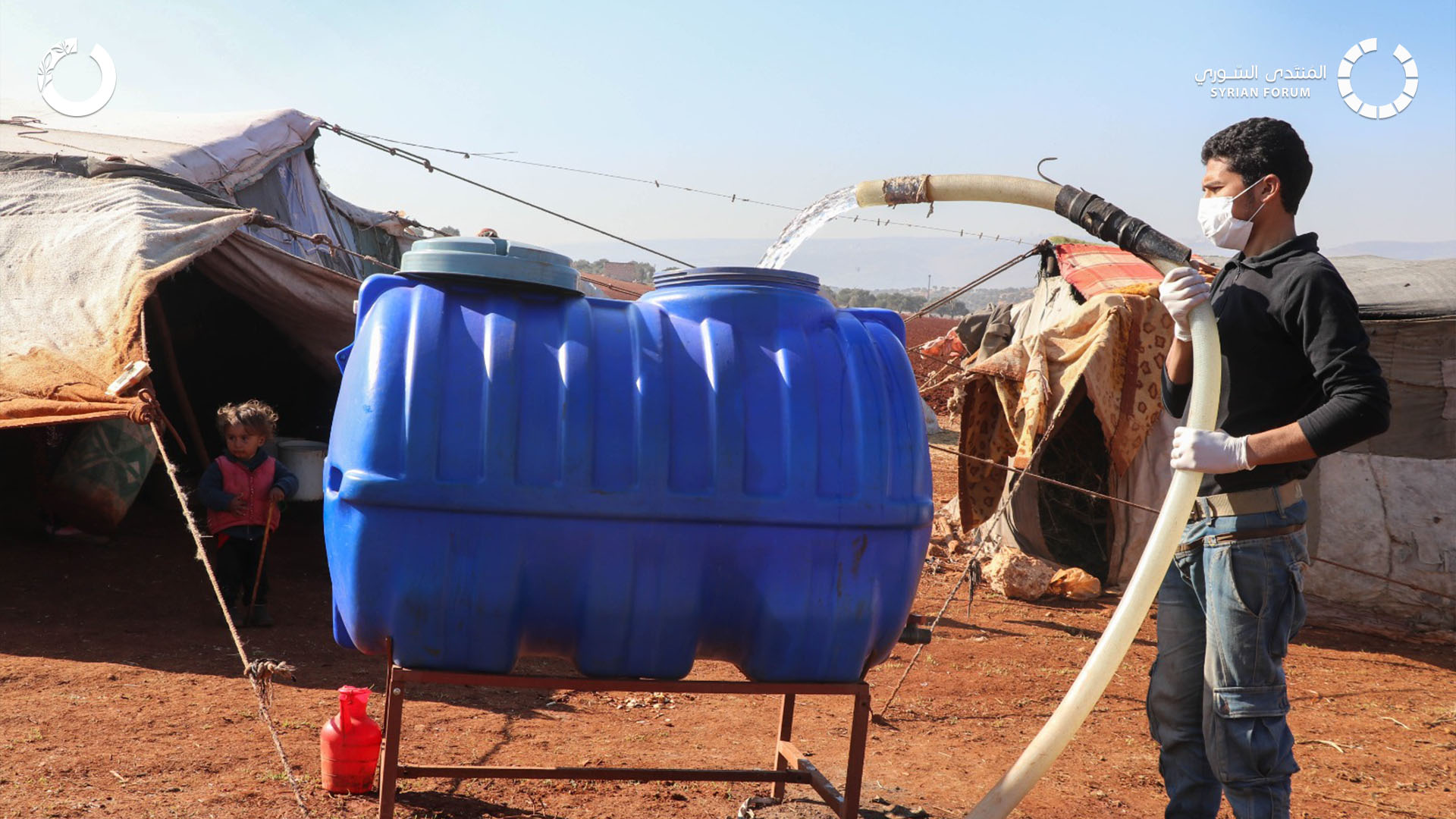 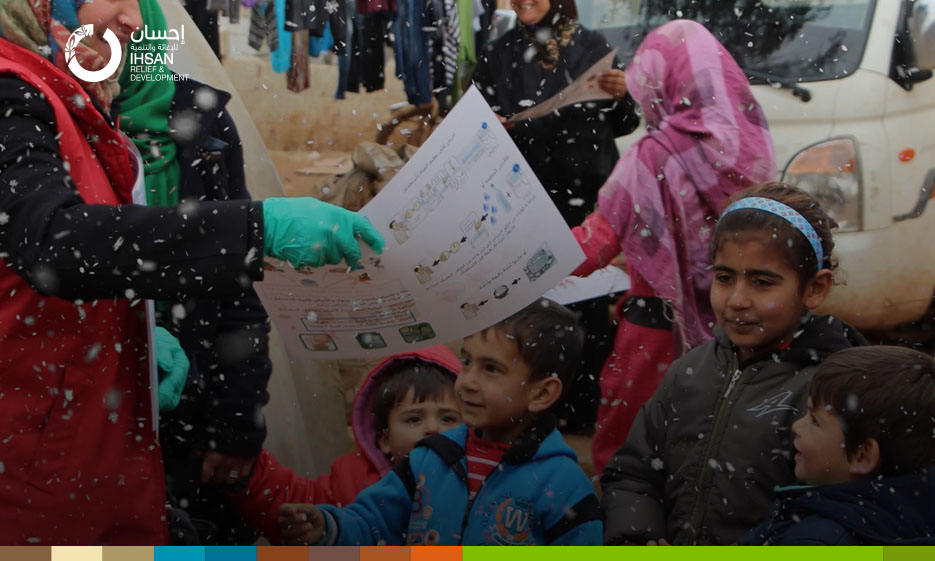 Every day humanitarian aid crosses the border from Turkey into Syria in order to reach communities affected by war.
Medical, food, social and educational support, shelter for the displaced, rehabilitation of infrastructure and livelihoods supporting for Syrian people are still urgently needed, which is being coordinated through the response of Syrian and international humanitarian organizations across the border.
Together to support cross-border humanitarian response. 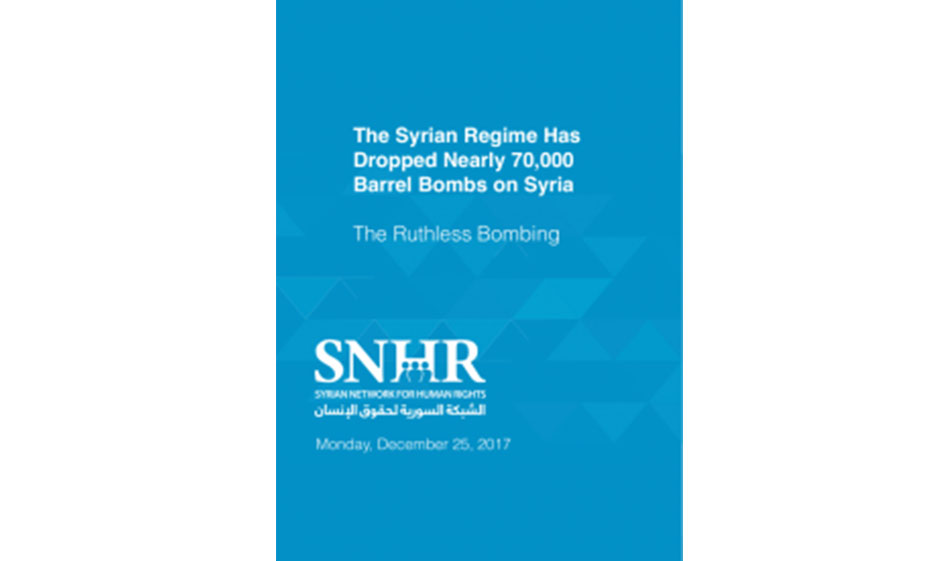 SNHR has released a report entitled: “The Ruthless Bombing” which documents that Syrian regime forces has dropped nearly 70,000 barrel bombs since July 2012.

The report records that no less than 68,334 barrel bombs have been dropped by Syrian regime helicopters or fixed-wing warplanes from its first documented use in July 2012 until December 2017. These barrel bombs have resulted in the killing of 10,763 civilians, including 1,734 children and 1,689 women (adult female). In addition, no less than 565 attacks on vital civilian facilities were recorded in which barrel bombs were used, including 76 on medical facilities, 140 on schools, 160 on mosques, and 50 on markets.

To read the Report from SNHR site 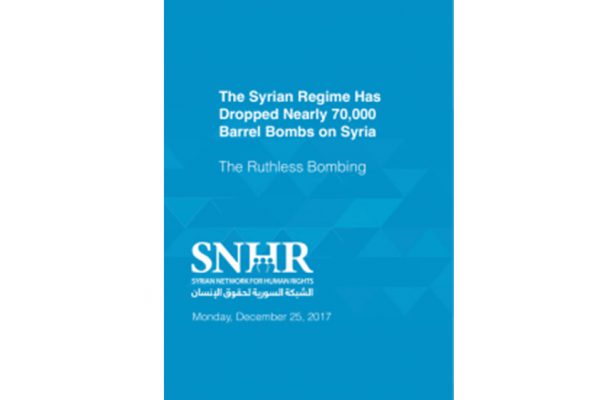 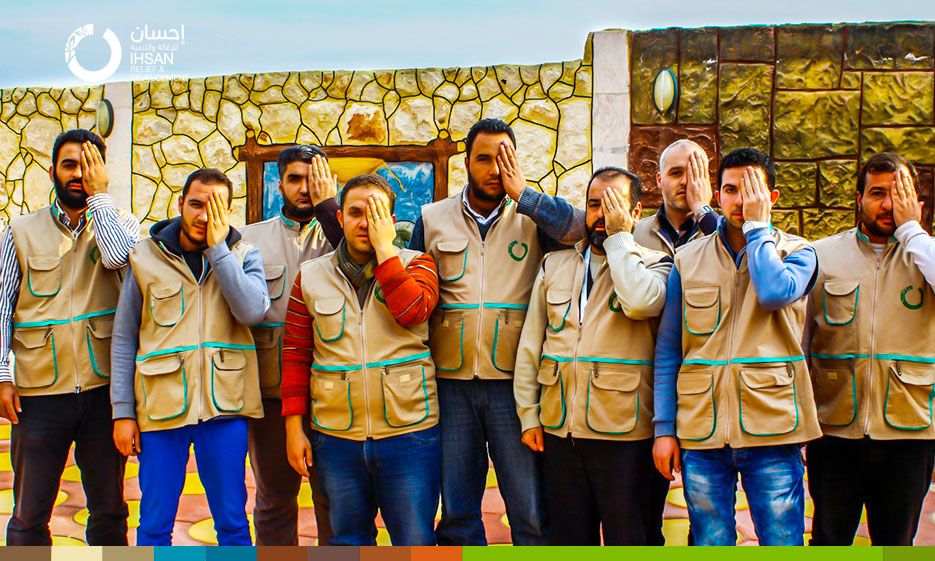 Solidarity with Karim, IhsanRD team stood for Karim who lost his eye and his mother in the bombing on Al-Ghouta

(For the sake of Kareem’s eyes), (Our eyes for Kareem)

With these titles, IhsanRD team stood expressing their solidarity with the Syrian child Kareem, from Al-Ghouta which has been besieged for more than five years and subjected daily to a savage bombardment that often affects civilians, killing dozens of people like Karim and his mother whom lost her with his left eye and parts of his skull by bomb shelling at a local market in Al-Ghouta, to be an icon expressing the thousands of children of the Eastern Ghouta, who are starving, who are martyred every day under relentless bombardment. 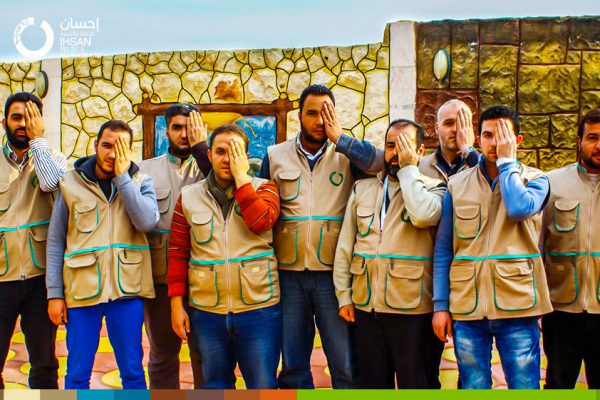 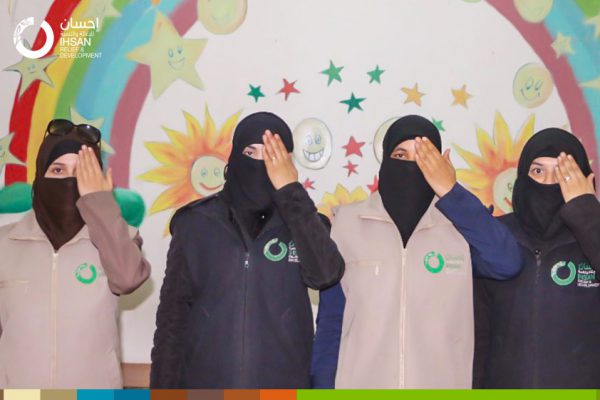 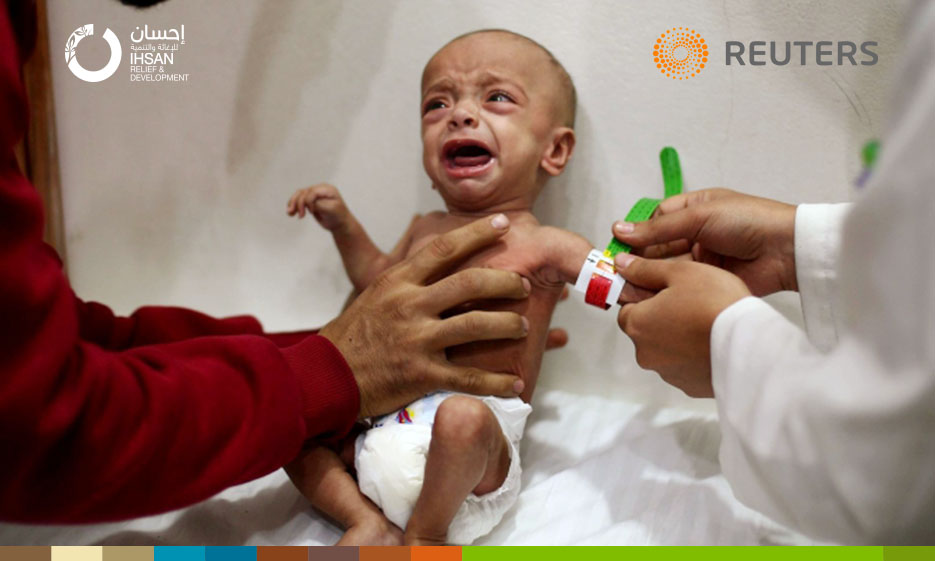 * No green light yet from Syrian govt for evacuation – WHO

GENEVA, Dec 6 (Reuters) – Nearly 500 sick and wounded patients still await medical evacuation from the Damascus suburb of eastern Ghouta, which the Syrian government has not granted, the World Health Organization (WHO) said on Wednesday.

Malnutrition rates in the besieged rebel-held area, about a 45-minute drive from the capital, are now “the highest seen so far in Syria since the beginning of the crisis”, WHO representative in Syria Elizabeth Hoff said.

A week ago the United Nations called on world powers to help arrange the evacuations saying eastern Ghouta had become a “humanitarian emergency”. Nine patients have died in recent weeks while waiting, UN envoy Jan Egeland said at the time.

”The Syrian government has not approved the medical evacuation yet,“ Hoff told Reuters from Damascus. ”There has been no movement.

The list of priority patients was provided from the opposition-controlled area about four weeks ago, she said.

Almost 200 children are among those on the growing but stalled U.N. list, who mainly suffer from severe chronic diseases including kidney failure, cancer and cardiovascular diseases, Hoff said.

Some war-wounded are among priority evacuees, she said. More than 400 relatives are also seeking to accompany the 480 patients for treatment in Damascus hospitals.

Jets believed to be Syrian and Russian struck heavily crowded residential areas in eastern Ghouta, killing at least 27 people and injuring dozens in the third week of a stepped-up assault, residents, aid workers and a war monitor said on Monday.

A nutritional survey done in eastern Ghouta during the first half of November collected data on more than 300 children between the age of six months and five years, Hoff said.

“The survey data results indicate a deterioration in the nutrition situation among children under the age of five years old,” the U.N. Children’s Fund (UNICEF) and WHO said in the findings.

“We delivered 8 tonnes of medical supplies to eastern Ghouta last month, but it is not sufficient,” Hoff said. 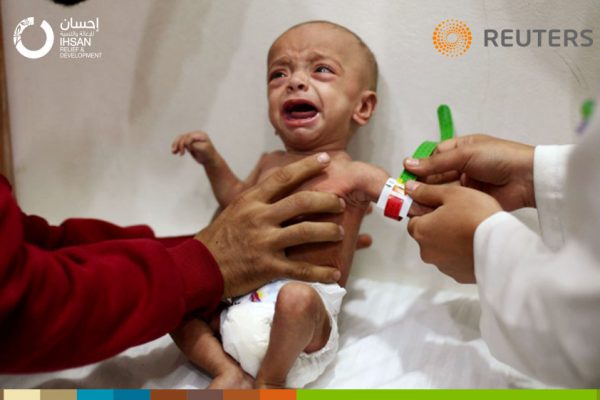 Statement by Panos Moumtzis, the Regional Humanitarian Coordinator for the Syria Crisis on the recent escalation of violence in Syria

Office for the Coordination of Humanitarian Affairs

I am appalled by reports of high numbers of civilian casualties due to heavy air attacks in Syria. Hospitals, ambulances, schools and displaced people escaping violence have been targeted by direct air strikes resulting in deaths and injuries of innocent civilians. September was the deadliest month of 2017 for civilians with daily reports of attacks on residential areas resulting in hundreds of conflict-related deaths and injuries.

This week, airstrikes on Ar-Raqqa city killed dozens of people and injured many others. Some 8,000 people remain trapped in the city. Between 19-30 September, airstrikes on residential areas in Idlib killed at least 149 people, the majority of whom were women and children. Attacks on medical facilities are depriving people in need of their right to life-saving medical care. Schools and hospital in Idlib have been forced to close due to fear of being targeted. Three explosions in Damascus city caused the death of 20 people and injured 15 more. Civilian casualties were also reported in Rural Damascus, Hama, Aleppo, and Deir-Ez-Zor.

I would like to praise the phenomenal work carried out by humanitarian workers and in particular national staff. Rescue workers on a daily basis risk their lives to help others.

The UN calls on all parties to the conflict to immediately take all measures to protect civilians and civilian infrastructure throughout Syria. Targeting of civilians and facilities including hospitals and other medical facilities is simply unacceptable and constitute a grave violation of human rights and international humanitarian law and may amount to war crimes. All parties to the conflict must respect their international obligations and act in a way that ensures the protection of civilians and humanitarian workers.