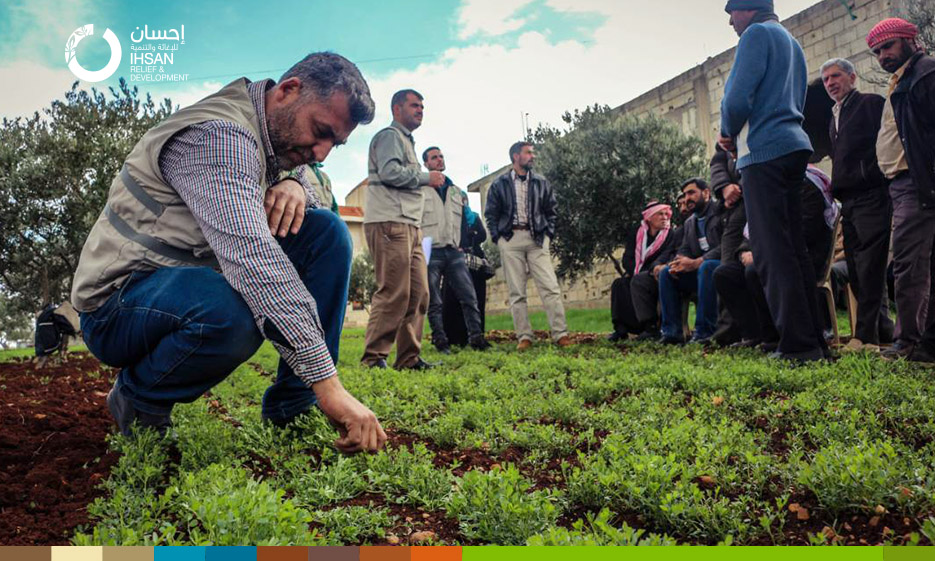 In Syria, every season the farmer relies on his land for living. However, harsh conditions of war have led him to seek new ways to invest the land in an optimal manner, which recover the lack of food and the difficulty of living and in order to achieve the greatest yield for the crop. One of the scientific methods on which the farmer depends on to increase production is the method of inter-crops.

“Inter-crops” is a well-known agricultural practice in sustainable agriculture. The main advantage of this agriculture is the increased efficiency of the use of available natural resources and an overall increase in crop productivity, compared with the cultivation of one crop. For example, the cultivation of leguminous crops in the areas between fruit trees which are beneficial to the soil in terms of fertility replenishment. The inclusion of pulses in multiple crop systems, such as inter-crops or simple crop rotation, is important for the sustainable management of soil nutrients, and towards more sustainable agricultural practices. It is of paramount importance given the need to intensify food production while at the same time using best-used natural resources and building capacity to adapt to climate change.

In the northern countryside of Homs, which suffered from the harsh effects of war, and continues to suffer from the conditions of the siege and the difficulty of introducing raw materials for agriculture, IhsanRD has launched “inter-crops” project to support food security and livelihoods by providing support to 400 families within inter-crops project between trees for more than 1100 dunums by providing farmers with agricultural inputs (seeds, fertilizers, pesticides), as well as partial irrigation support. The project also aims to support the most vulnerable and reach the besieged areas of Syria to enhance the resilience of the population and improve safe access to food.

IhsanRD has organized field training seminars for farmers within the framework of the Inter-crops Project, with the aim of increasing practical experience in applying the best agricultural practices in the service of legumes and olive trees. The training covers practically all topics related to modern methods of agriculture, the use of machinery, planting dates, fertilization, disease control and modern irrigation techniques. Haj Abu Saleh, who was present at the symposium, spoke of the motivation for his presence: ” We may wait for the food basket aid, or we may plant what we really need by our hands. For me, I prefer eating from what I plant myself. When farmer the gives the best effort to his land and by the right agricultural practices, it will give him in return a better crop.”

This training seminars come after the project team successfully completed the previous stages, which included the first phase of registration of farmers in the project lists, and then conducting field inspection and standard testing of the quality of seeds and fertilizers before distributing them to farmers. Then spraying of fertilizers and sowing seeds that were previously distributed to farmers under the supervision of technical engineers and taking standard measurements according to modern methods of tillage and sowing. 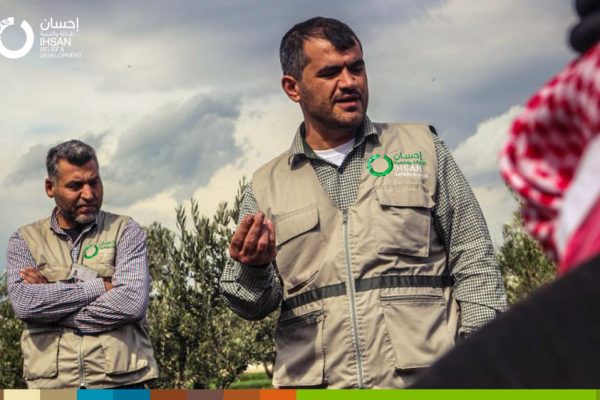 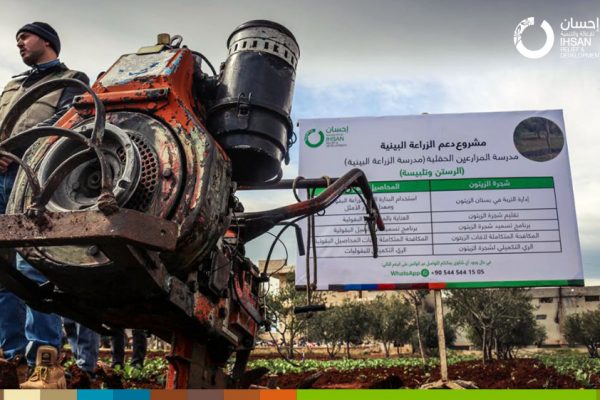 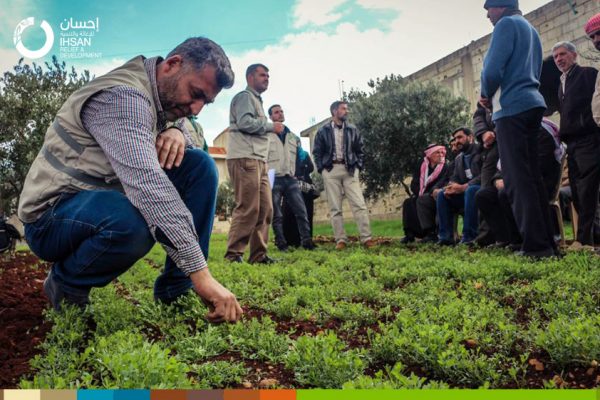 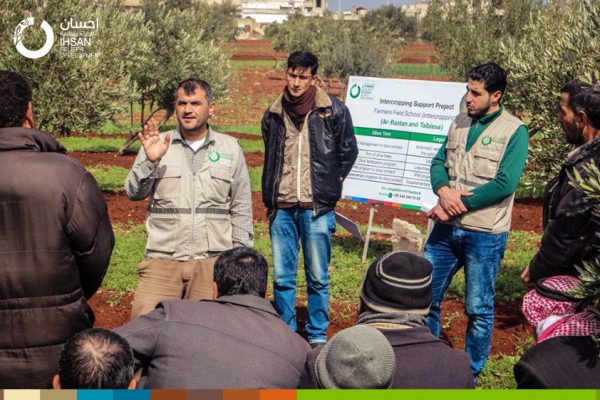 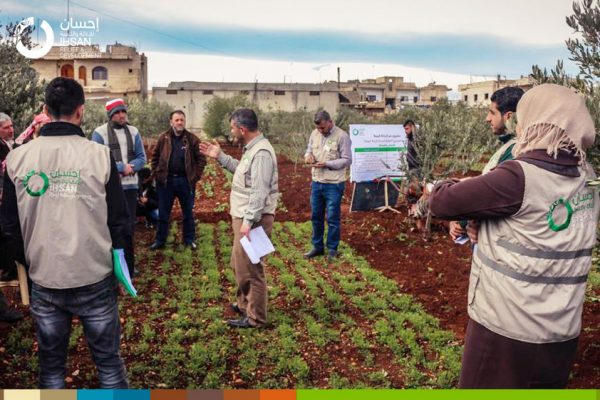 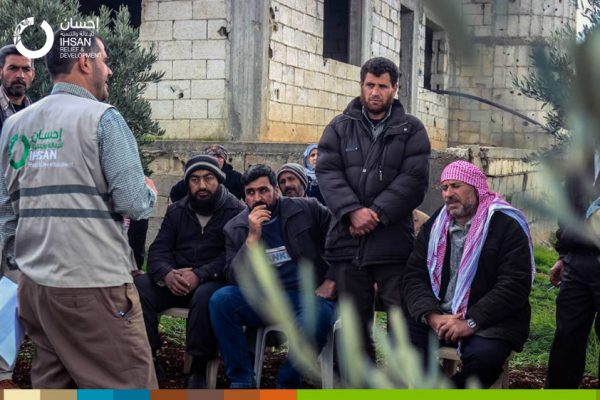 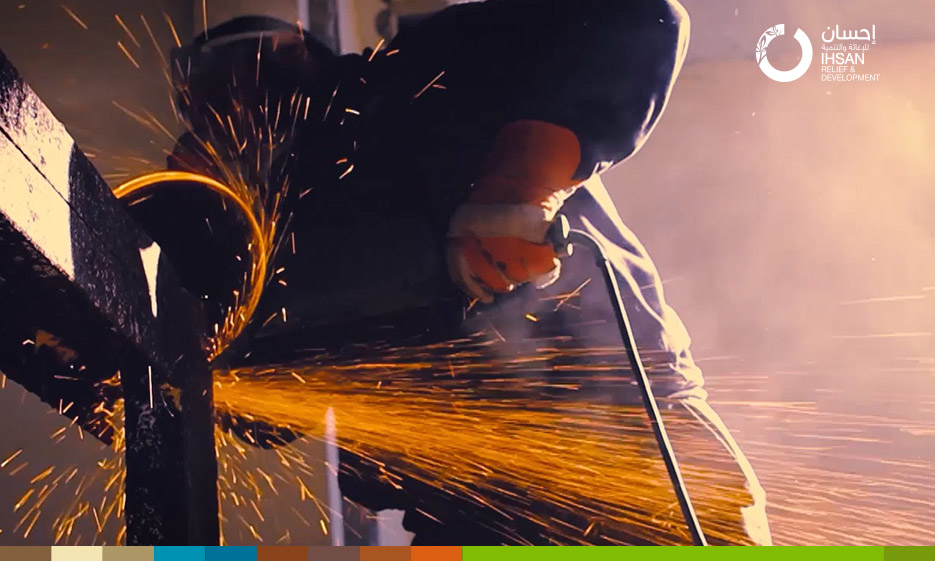